It's been a long day: a praying mantis tried to assault a shelter employee, a policeman beat it back with his baton, and a dog peed on my leg.

Alright, it's not really as exciting as it sounds. I was in the kitchen eating some inmate-grown corn when there was a sudden burst of shrieking from the hallway. I went to investigate and found two of the girls that work at the shelter trying to alternately catch a praying mantis and fleeing in terror when it would fly at them. Once it landed in one of the girl's hair and the girl ran shrieking down the hall.

At the same time, an ACO came in bringing a squirrel. He heard the noise and came to investigate, then caught the mantis himself once he realized what they were doing. The girls were trying to catch it to feed our chameleon, so the officer tossed it in the cage, but it landed out of sight of the chameleon. Next thing I know, the ACO whips out his beat-stick (billy club? baton?) and starts poking the mantis, trying to get it to move. It doesn't work, so the ACO sticks a piece of tape on the end of his baton and picks the mantis up with it.

On an unrelated note, a dog peed on my leg. Oh well, part of the job. 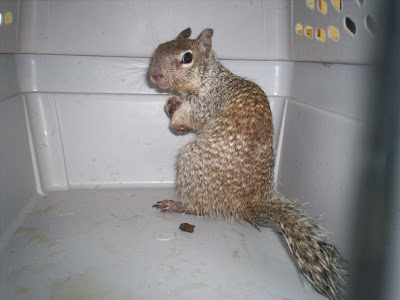 A less fun side of the job is the disease we get occasionally. Right now the shelter is abnormally empty, we have pans of bleach everywhere to sanitize our shoe-soles, and there's practically armed guards patrolling the halls to make sure no one touches any of the animals. It started when a dog became sick, but it was an internal disease and we couldn't tell until it died suddenly. Since visitors (and even a couple shelter workers--we won't name names) can't seem to get the concept of "germs" through their head, the dog had been petted, then the people went on to pet half the other dogs in the place without sanitizing their hands between dogs.

The first dog died, as did a couple others that were adopted out. The decision was made to clean house, so we euthanized anything that looked in the least bit sick, or who's time was up. So the shelter is spookily quiet, no one is allowed to adopt a dog for a while until we're sure everything is safe, and we're keeping a close eye out for any more sick dogs.

Why did he bring a squirrel? There's a whole bunch by where I live.

Normally they don't. I think the only reason he brought this squirrel in was because it got caught in a live trap he had set for feral cats, and he had to bring a dog in anyways so he decided to show off the squirrel.