Friday and Saturday was our Elder's Quorum camping trip.

My wife blogged about it from her end and was fairly accurate in her description of the event being presented as a way to work off some testosterone poisoning. There were promises of guns, fires, possibly explosions, and definitely no kids. 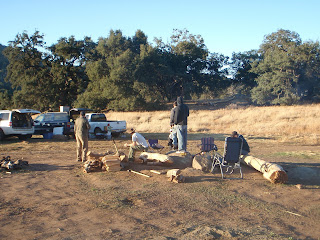 There was a hairy road to get to our remote wilderness campsite, but we all made it alive.  There were seven of us, four of who were auto mechanics, so the campfire conversation was distinctly auto-oriented.  The moon was nearly full that night and it was surprisingly bright, which led directly to The Incident.

About 11 p.m, as we sat around the campfire, the manager of the property (who was also camping with us) told us that the narrow, rutted dirt road we had come up continued on to the top of a nearby peak.  One of the mechanics had brought an old BMW that he had fixed up Baja-style, and he promptly jumped up.  "It's bright enough out here," he said.  "I'm going to go check it out.  Who wants to come?"

Another guy took him up on his offer and a moment later, the two of them were roaring up the dirt track towards the top of the mountain.  The property manager watched them go, then said, "They're going to get stuck.  There's no room to turn around on the road."

There was silence for a moment.  "You probably should have told them that before they left," someone finally suggested.

The property manager shrugged.  "They said they wanted an adventure."

They apparently had one, because an hour later they came hiking on foot back down the mountain.  As they later explained, they had reached the end of the road, where there was a small dirt patch.  It was just large enough that with their small car, they probably could have done a hundred-point turn and ended up facing back down the hill.  Being 20 year old guys, the thought of doing it that way didn't even enter their minds and the driver decided to try to gun his engine, spin out on the dirt, and swing the car in a circle.

All he succeeded in doing was going off the road and nearly rolling down the mountain, fortunately stopped from doing so by the brush on the side of the road.  The car was holding on precariously with two tires, necessitating cautious climbing out through the driver side door for both of them.

"We'll get it in the morning," said the property manager, unperturbed. 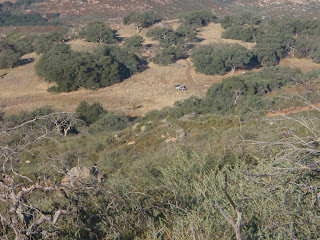 The next morning, we started up the mountain in a pickup truck.  The goal was to somehow use the pickup truck to rescue the car, but true to the form of all ill-fated rescue missions, we only succeeded in nearly getting the pickup truck stuck.  It was only "nearly" and not "completely" because we ended up physically lifting up the rear end of the pickup truck and swinging it around. 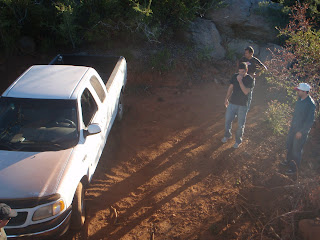 Fortunately, that led to the realization that if seven guys could lift up the tail end of a pickup truck, surely we could heft a small Baja-style BMW.  We finished the hike up the mountain on foot and finally arrived at the car. 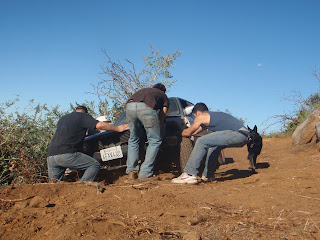 It was dangling pretty solidly over the edge of the hill, but it was nothing we couldn't handle.  The Elder's Quorum president gave a stirring speech based on Elder Utchdorf's talk, "Lift Where You Stand," and we manually hefted it out.

Unfortunately the first video section was fairly large and was rejected by Blogger.  This second section I videotaped is just as good though, because it's shorter and still demonstrates the prowess of our biceps.

So all the people and vehicles survived, but one casualty of the event was my sock, forgotten by the campfire as it dried out from the previous night's dew.  It's the tragedies in life that make us stronger, though, so it was probably a good character-building experience.  And a reminder to bring a spare pair of socks next time. 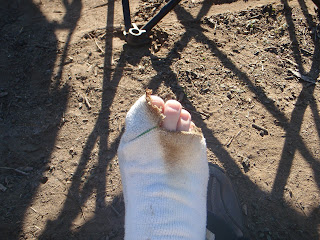 We finished the morning on a lighter note, shooting large amounts of ammunition from a wide variety of weapons.  The cows in the nearby field cautiously moved to the far side of their enclosure, but the wives would be pleased to know that we were extremely safe and that the only casualties during this portion of our event were about 250 clay pigeons and a variety of soda pop cans and assorted campfire detrius. 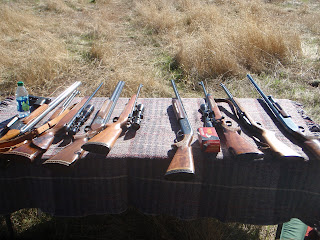 We even cleaned up when we were done. 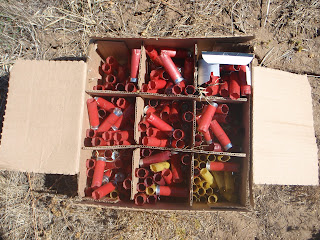 You manly man, you.