I guess I've never really described my thesis project in detail, and since my wife recently heard a horror story about a husband who had been pretending to go to school for, like, four years before his wife found out he wasn't, I decided it might be wise to show a little bit of what I'm currently doing.

(Officially: "Given a search task in a Wilderness Search and Rescue domain performed by a large heterogeneous group of agents, a mixed initiative system implementing both adaptive and adjustable autonomy performs better in a complex or high workload situation than a simply adjustable or adaptive system.")


This is the main window. The little yellow squares are the 200 robotic searchers, and the big yellow box is their current search area. At the moment they're on "Low Independence," indicated by their yellow color. If they were red, they'd be on "High Independence," which basically just means that they'd be creating their own search areas, rather than waiting for the supervisor to do it. 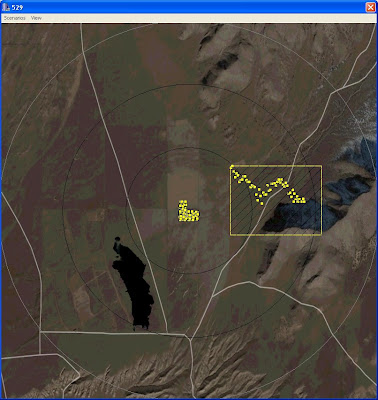 Somewhere on the map, there's a missing child. (Actually, there's five so we can average the length of time to find them.) The picture at the top is a picture of the kid(s), and the 16 items below him are his backpack items.

As the searchers search, they find items. Most of the items are "distracting" items, such as the three that they've currently found. If they look in the right place, however, they'll find the backpack items that the children lost as they wandered, which will let the supervisor narrow down their search and (hopefully) find the children.

I'm in the middle of having handfuls of experimenters come in so I can gather data, but I'm sort of simultaneously writing the thesis, at least the parts I can without actually having data.

So it's a tradeoff. What measures are the most important? And are you willing to sacrifice being best in a FEW measures to be second-best in a LOT of measures?
Posted by The Writer at 12:52 PM

who had been pretending to go to school for, like, four years before his wife found out he wasn't
Actually, I don't remember ever seeing you in TMCB :D

K La, you may wanna check on him :D