I went to the shelter yesterday. It was crazy busy, so it was a lot of fun. Here's a key for organizations that use volunteers: keep them busy. There's no worse feeling for a volunteer than feeling that they aren't being useful.

A family came in that was interested in a malamute we had. I don't know if it was because of the spring-like weather we've had the past couple days, but the malamute was shedding huge clumps of fur. I put them in the Get Acquainted room, then got them a brush and told them to brush the dog. Twenty minutes later, they had an enormous pile of fur and had decided to adopt him. 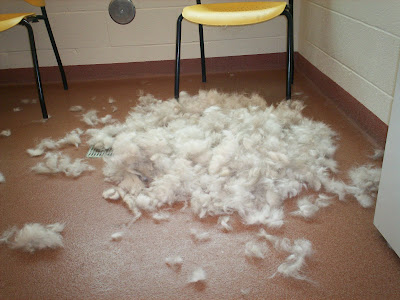 Near closing time, a family came in that spoke only Spanish. From time-to-time we'd have inmates that spoke Spanish (human inmates, not animal), but no one at the shelter that day spoke Spanish. The family wandered around a little, looking at the animals, but couldn't really communicate what they wanted. I was thinking to myself, "You know, I could probably use the online Google Translator to talk to them...but it would be awkward, and they probably don't have the money to adopt an animal anyway." Yes, even I fall prey to stereotypes sometimes.

The dad and one of the daughters finally went out to the car, but the mother and another daughter paused in the lobby to look over our board of "Happy Tails" (success stories). Finally I decided to just go for it. I motioned the mother over, then pulled up Google Translator. It was still difficult, but I finally found out that they wanted to adopt a cat, and that the little girl had actually already picked out the one she wanted. They didn't have any problem with the adoption fee, and twenty minutes later they walked out with a new pet cat.
Posted by The Writer at 10:09 AM

Yey for both! 1. the mal owners know how bad the shedding gets. lol And 2. that's awesome that they got the kitty. :)