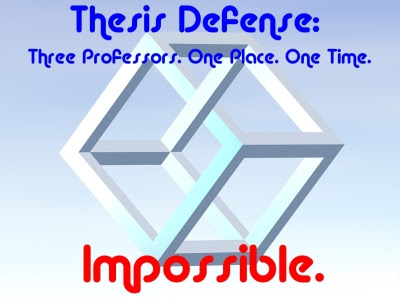 I finally finished my thesis proposal. After the seventh or so draft, my adviser finally approved, and I passed it on to my second committee member. Surprisingly enough, he didn't have any problems with it either. The next step: scheduling my thesis proposal defense.

"The real hard part of a thesis proposal defense isn't writing the proposal," said my adviser. "It's getting the three professorial members of your committee together in the same place at the same time so you can defend it."

I thought he was joking. He wasn't.

Will the third week in October work?

Curses again! Are they deliberately arranging their schedules to make this impossible? Let's try...

The last couple days of the first week in October? Any closer than that, and there won't be time to prepare, schedule, let Dr. Snell (the third committee member) read the proposal, etc.

Between Dr. Goodrich, Dr. Olsen, and Dr. Snell, the available times are:


October 4 is obviously out. However, a flaw in their carefully designed scheduling algorithm reveals that they have nothing scheduled from 9 to 10 am, or 1 to 2 pm.

Or is it a flaw? Is an hour long enough...especially since they have to leave time to actually get to their "scheduled activities"? (I put that in quotes, because my theory is that they just randomly choose times to be unavailable, finding my struggle to coordinate their schedules amusing.)

I'm guessing they'll say an hour isn't long enough. But...the fourth week in October? That's a month away! I'll almost be ready to defend my thesis itself, along with the proposal!

Sigh. We'll see what happens. I guess there's nothing stopping me from starting on my thesis itself while I wait to defend my proposal. The problem is that as I've coded my simulator up, my direction has already changed from what's in the proposal. In another month, my thesis won't look anything like my proposal and I'll have to defend a document that has no basis in reality. :)
Posted by The Writer at 11:13 AM

Hahaha. Loved the table in round 2.
I want to show that to Snell :D

As a fellow graduate student and someone who just scheduled a qualifying exam (oh woe, it had to be within one particular week!), I found this absolutely hilarious.