Provo High and Mountain View unofficially got together tonight to play a game of Powderpuff football.

Apparently, the principal wasn't too happy with this, and even after officially distancing Provo High from the event, he followed the event to the new location (Westridge Elementary) to try to break things up. 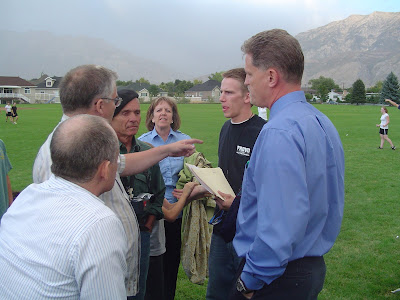 People weren't too happy about that, or about the fact that he called the cops (below picture, see the badge on the guy in the blue checkered shirt?). Some guy made the point (anyone know who the guy was?) that like it or not, the event was not being held on Provo High grounds, so the principal couldn't really do anything about it. 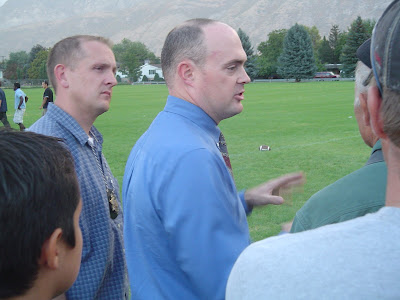 I couldn't really understand the principal's reasoning. At first I thought he didn't want the game to happen because he was afraid the students would be injured, and that made sense to me, even if I didn't think it was an adequate reason to cancel the game. People die canyoneering, but do I stop doing it?

Then I found out that apparently there's an "official" game later on this year. Will less people get injured at that? Would the assembled parents be any less quick to get their children to the hospital at this "unofficial" game than at the "official" one? Anyway, the principal finally realized that as good as his intentions were, he didn't really have a leg to stand on. He made a final announcement to the crowd and left. 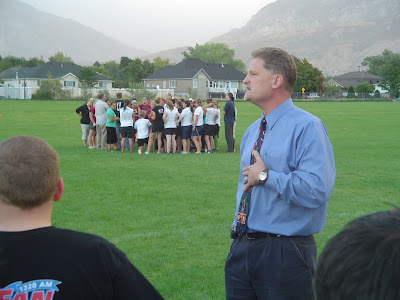 Let the games begin!
Posted by The Writer at 7:39 PM


he messed with the Provo high Debate clubs Budget this year even thow he promised he would allow us out of debt and give us a clean bill of heath now that we have a new teacher last year WE ARE STILL IN THE HOUL ABOUT 900 $$!!!!