Over the weekend, a friend, his brother, and I went on a canyoneering trip. We chose Quandary Canyon in the San Rafael Swell of southern Utah as our destination, mostly because it was infamous for its "keeper potholes" and we wanted to try out some gear.

Keeper potholes are so called because once you're in them, it's very difficult to get out. In the picture below, my friend is spanning a pothole...not one we had to go down inside. 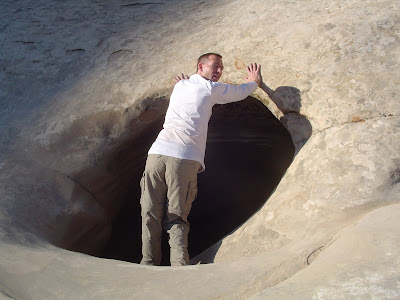 In the below picture, my friend is using a "Happy Hooker" to get out of a keeper pothole. This is a long pole with a hook on it. Attached to the hook is a set of "aiders," like a rope ladder with loops for your feet (but made out of the same material seat belts are made of). Using the pole, he set the hook on the lip of the pothole, then climbed up the aiders. 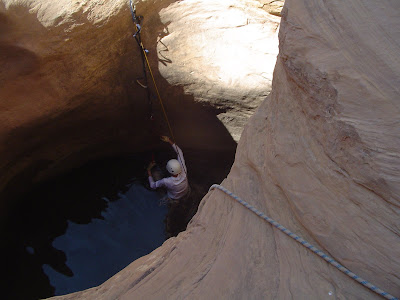 Another technique we used on a different pothole employs "pot-shots." These are simple canvas bags that you fill with sand (or in our case, mud), then throw them up and over the lip of the pothole. The weight of the sandbag offsets your weight as you climb up and out. Note how small the bag is. It doesn't really need to be much bigger; the friction of the rope over the lip of the pothole, added to the weight of the bag, really is enough to offset your weight. 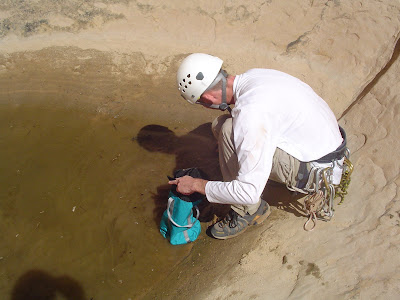 The final technique for avoiding keeper potholes is to use a guided rappel. After one person is over the other side and wedged in a crack (me), the tension on the rope is used to let the person slide right over the top of the pothole. While my friend is posing for the camera in the picture below, I'm slowly being squeezed to death in the crack. 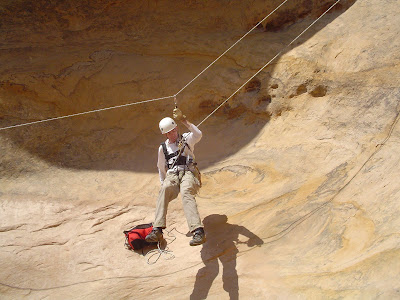 Quandary Canyon was one of the more "open" canyons I've traversed. It had a few sections of narrows, but unlike some slot canyons, it would be possible to climb out in several locations in case of a flash flood. Unfortunately, it didn't have a lot of the deep reds and yellows that places like Zion National Park has, but it was pretty in its own drab, gray sort of way. 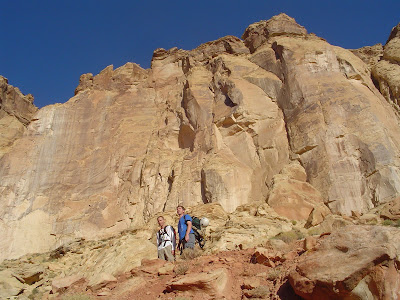 Near the end of the canyon, a little growth had sprung up. Standing above the other two guys in the party as they pushed their way through it, I thought they looked like they were in an African safari with their white "pith helmets." 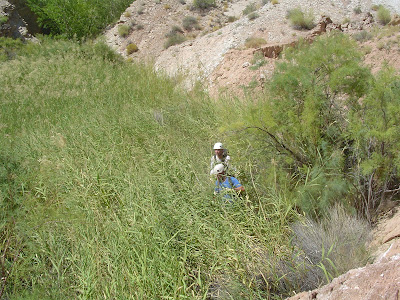 Stopping for lunch. Don't drop your food down the hole, it could be hundreds of feet to the bottom... 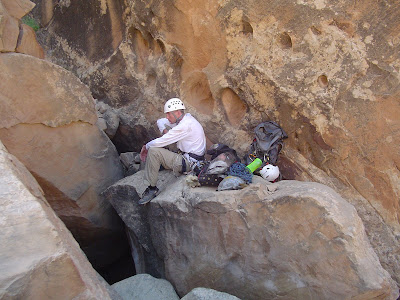 We climbed up a steep slope in what we thought was the right direction...only to find nothing but a cliff on the other side. Oh well, we'll take a picture, try to salvage at least something out of the climb. 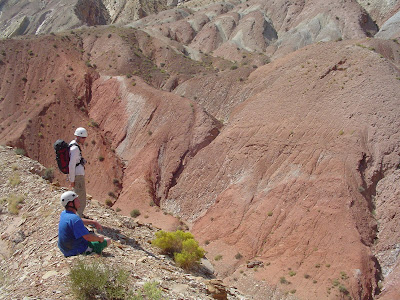 And the worst part of the trip: going home. 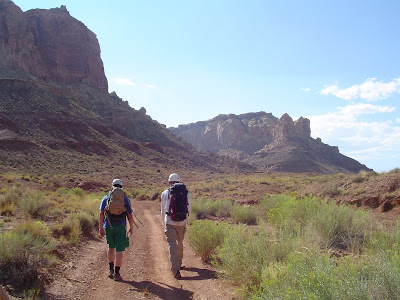