Snowshoeing and Other Recent Activities

I've realized it's hard for me to make a decent blog post without pictures. Maybe it's because I personally find posts with pictures more interesting. Anyway, Child and I have recently visited Idaho (and did some geocaching), hit up the Tran-Siberian Orchestra concert, and celebrated my birthday (which also involved me using GPS to find my presents, scattered through the neighborhood).


However, the only event I thought to get pictures of was some snowshoeing a friend and I did this morning.

Child let me open a Christmas present early and it was snowshoes! Coincidentally, we got a nice snowfall a couple days ago, so I called up a friend to ask if he wanted to go out. He rented a pair of snowshoes and we headed up to the Big Springs area. 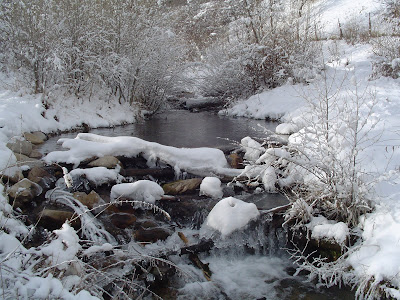 For being in the mountains, the weather was surprisingly pleasant. I had packed for bitter cold, but most of my clothes ended up staying in my backpack. Even the streams were still running, although there was plenty of ice on the rocks. Another picture I didn't include here shows a bush with branches dangling just above the water, and huge gobbets of ice forming on the branch-tips like giant frozen raindrops. 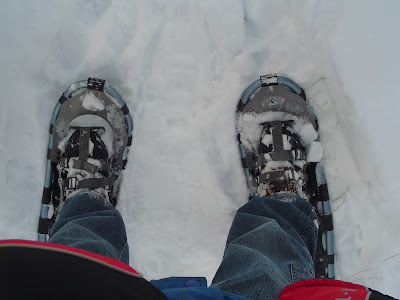 Here's a shot of my snowshoes on my feet, as best as I could do. If my friend sends me the pictures he took with his (really nice!) camera, there might be a better one among them.

One thing I quickly realized the first time I went snowshoeing is that snowshoes don't exactly make you float like a butterfly on the surface of the snow. You still have your whole body-weight concentrated on a fairly small surface area. This translates into you sinking up to a foot in the snow...but when the snow is several feet deep, you still come out ahead. Regardless, it's still a fairly strenuous activity when you're hiking in unbroken snow. I'm hungry now. 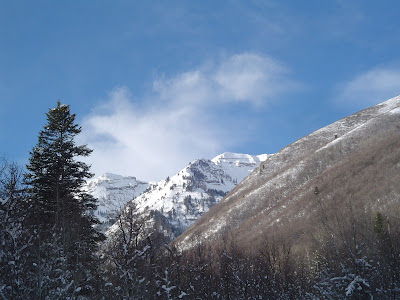 Sunny day, blue skies. Both the previous times I've been snowshoeing, it's been snowing. And dark. So this was a change. 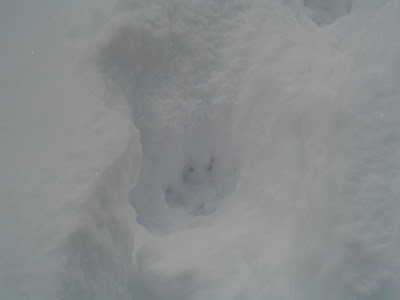 The obligatory wolf footprint shot. This print was almost as big as my hand.
Posted by The Writer at 1:21 PM