Fence II: The Return of the Fence's Revenge

Despite naturally missing my wife and daughter terribly, with them on vacation, today was a great day for getting things done.  I tackled the fence on the right side of the house and even without missionaries from church to dig the postholes it was fairly easy going.

Unlike the left side of the house with its five sections, steep hill, nearby tree, and double-wide gate, this piece was only two eight-foot sections on flat ground.  The most complicated part was figuring out how to join it with the Leaning Tower of Cheap Engineering that was the remains of the previous fence.

Fortunately, it was tilting enough that the termites apparently had a hard time keeping their footing and had left enough wood that it was still somewhat translucent.  I decided to salvage what I could, but some of it was bad enough that it had to go.  As I dug up one of the posts that I was going to replace, I was amazed by how little concrete the builders had originally used.  No wonder it was leaning!  I've seen more concrete stuck in the treads of my tires.

The finished product was decent (guess which half is the new half): 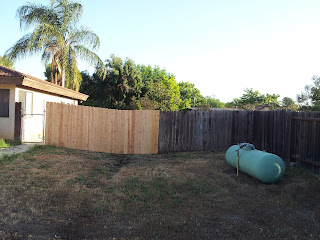 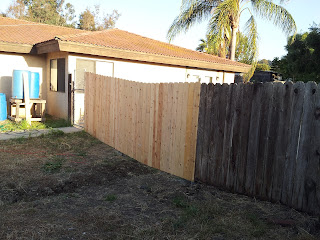 When our company had moved into its new building, the landlord was going to throw away some old chain-link fence material, so I had borrowed the U-Haul our company was using and took it home instead.  This is what I still have left after doing the fence today: 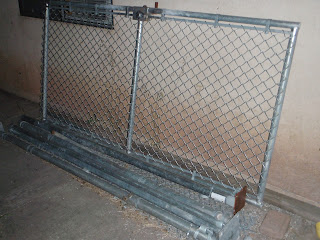 While an elephant-proof fence is a laudable goal, an eight-foot tall gate has a certain imposing feel that could be a little off-putting to neighbors and visiting relatives, and perhaps lead to passing policemen wondering if we were growing marijuana in our backyard.  Then again, maybe they wouldn't care.  Anyway, I bought a metal-cutting blade, took my handy Sawz-All, and trimmed two feet off the gate: 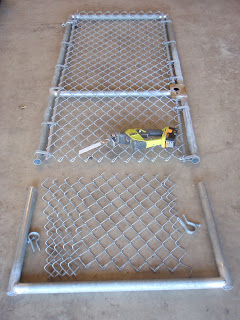 When mounted, it looked a little...headless, but that didn't affect operations.  At least we don't have to worry about Ash being carted off by coyotes now!  Or at least once I mount a latch of some kind. 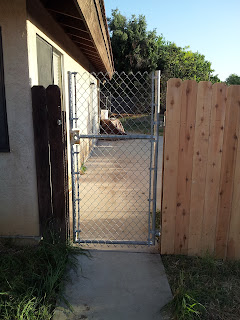 All in all, a good day's project.  Next up, the 130 feet of fence at the back of our property!  And by next, I mean of course next year. 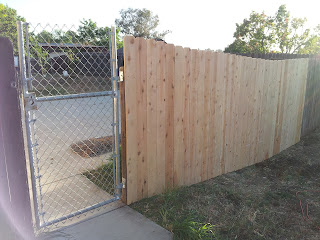 Amazing! That looks so great! You are incredible!