Thanks to my father and his darn do-it-yourself ethic, KLa and I decided to take a stab at putting up a new section of fence ourselves.

We probably wouldn't have done it ourselves except interestingly, it was like pulling teeth to get a quote on our fence.  We had a general contractor acquaintance come over and measure, but he never followed up.  I know for a fact he was looking for work, which is why I offered the job to him, but I suspect he weighed digging postholes in California's rock-hard soil and eating, and decided ramen wasn't that bad.

Our neighbor wanted to repair a joint section of our fence (the section from our side that was in the best shape and the last one we would have done if it was up to us, unfortunately) and had a man come out to give a quote.  He, too, made measurements, then vanished and never reappeared.  It's odd.

So we decided to take a shot at it ourselves.  My dad and I had put up a fence when I was younger so between that and a few websites (and a healthy dose of "winging it") we got what we needed and began. 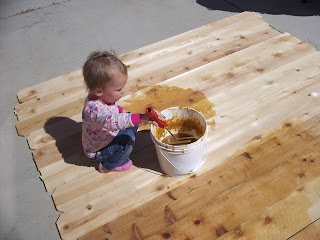 The missionaries from church were eager for a service project and I was happy to oblige.  For the cost of a couple burgers from Five Guys, they did all the heavy work of digging the postholes.  (Note to self: don't put a posthole so close to a tree next time. Whoever you sucker into digging the hole will take a long time getting through the roots.)  I poured cement, cut boards, and "managed." 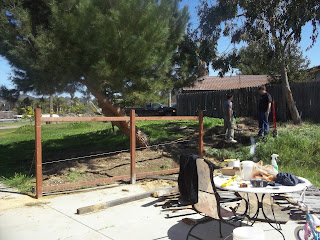 KLa and I put up the first section of slats, and later the missionaries came over and again and helped finish it off. 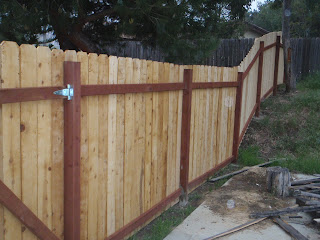 My bro-in-law came over and helped build the gate.  And just like that we were done! 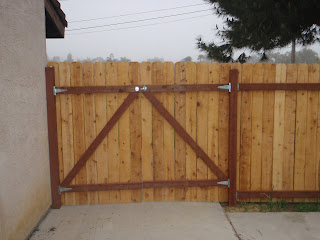 Granted, the project was spread over about a month and a half of Saturdays, leading our back-fence neighbor to jokingly question which dynasty we were planning to finish the Great Wall in, but the end result wasn't half-bad.  You can tell just by looking at the fence that some good management went into it.

Our next project is the fence on the other side of the house, and I hear a new missionary moved into the area.  I wonder if he's ever dug postholes...
Posted by The Writer at 9:21 AM

I love the line about seeing the good management that went into it- I love being the manager!