Burro Wash! A canyon in Capitol Reef Park. My last canyoneering trip of the year, according to Child. For some reason, she doesn't want me to be gone when Nine is born. I'm not sure what the big deal is...

Anyway, five of us went on this trip. From left to right Rob, me, my brother Enoch, Mike, and Randall. I took Enoch on this canyoneering trip as a birthday present, so I hope he enjoyed it. He seemed to have fun. 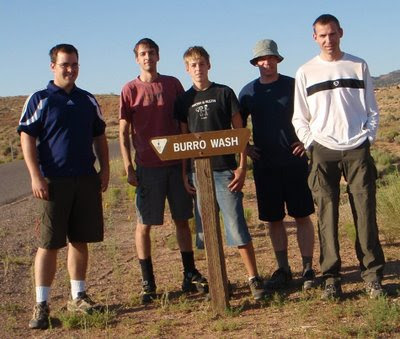 At the very beginning, Randall's GPS wouldn't work. We also had a topographical map so you'd think we wouldn't have a problem, but when your only directions are, "leave the trail when you see a faint miner's track going roughly southeast," and that miner's track isn't on the map, then the GPS coordinates all of a sudden become more important.

After debating about the relative "faintness" of a track we saw leaving the main trail, we finally kept going. After becoming thoroughly lost and facing the prospect of either scaling a sheer 200 foot cliff or doing a three mile end-run around a mountain, I finally suggested Randall try his GPS again. This time it worked, and realized that the first track we had seen had indeed been the correct one. 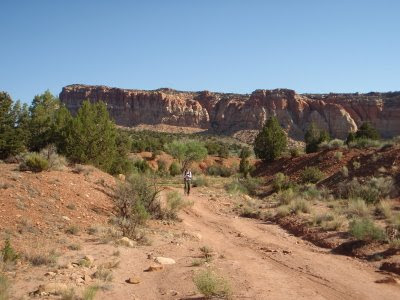 We backtracked, but rather than go all the way to the proper ascent to the saddle we were looking for, we struck off a little early (or a little late, if we had been going the right way) and found our own way up the cliffs. 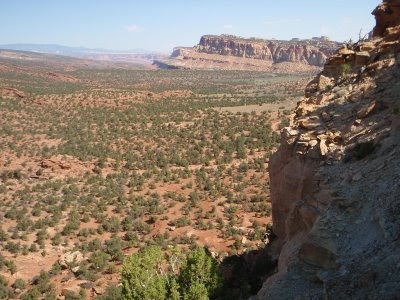 Here's a shot looking down. Straight down. 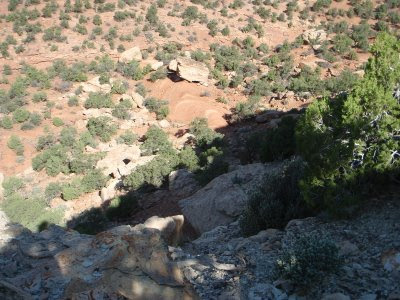 With that sort of drop below us, and nothing but loose sandstone underfoot, you can understand why Rob is a little cautious in his climbing. 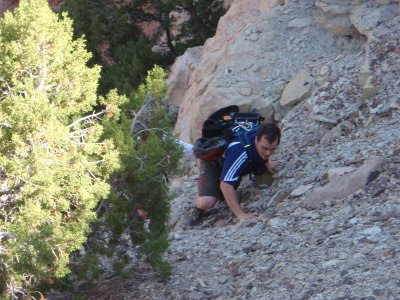 At the top at last. We stop for a break before slipping through a crack in the wall behind us and immediately seeing... 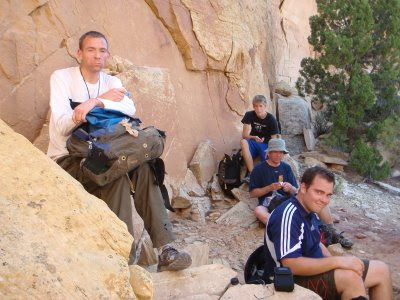 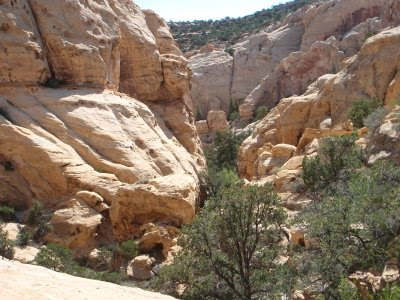 After a bit of downhill scrambling, we get into the first narrows. There's four main sections, with the possibility of water. Considering the heat (101 degrees) and the openness (and therefore sunniness) of Burro Wash, we opted to forgo the suggested wetsuits. It was a good decision. There were only a handful of pothohles with water, and it was never more than waist deep. Coming out of the water, we dried in minutes. 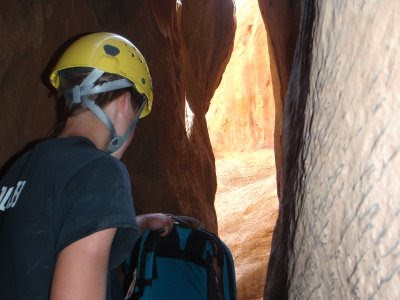 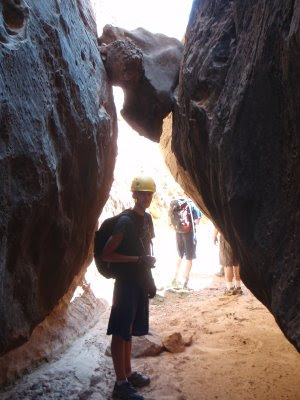 Between four sections of narrows were plenty of sunny, open spaces. 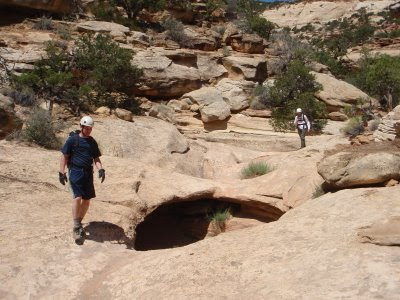 There were also four or five rappels. 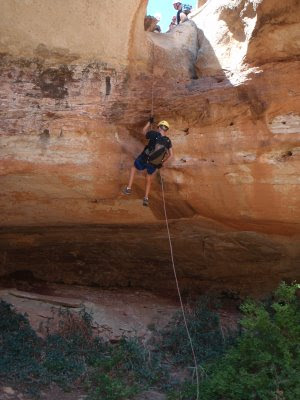 Either the water or a conservationally-minded hiker placed this log to hold up the rock overhang. 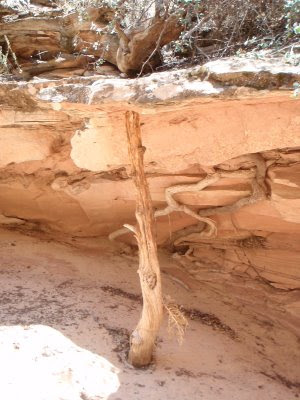 There was also a snake. 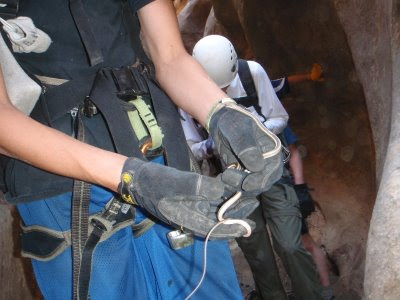 And our first water. It actually felt sorta nice considering the heat, and considering that my feet were burning up in my neoprene socks and water shoes I was wearing. 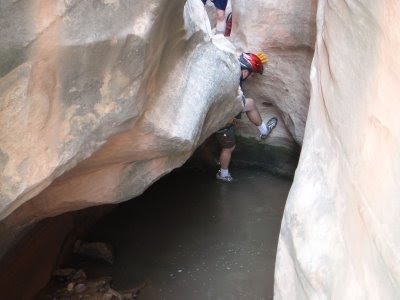 Hanging out over a pool of water for a rappel. 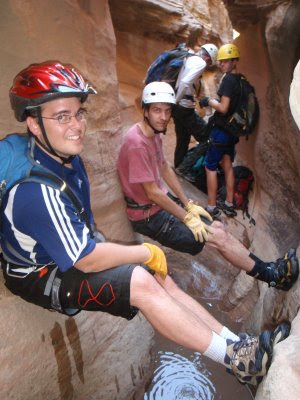 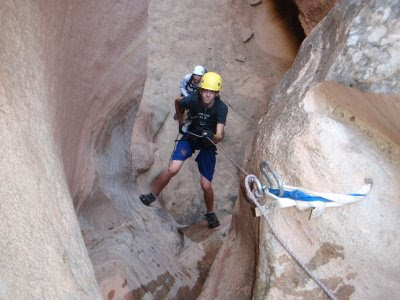 A water slide. Except despite what the sequence of this picture and the next would have you believe, there was not actually any water at the bottom of the slide. It had apparently already dried up, along with most of the potholes. 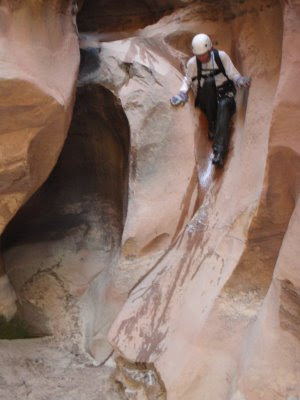 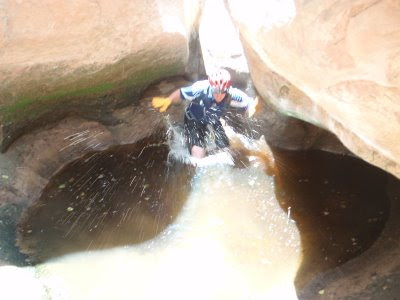 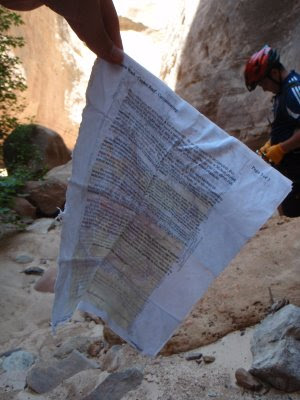 Interesting rocks. They reminded me of popcorn. 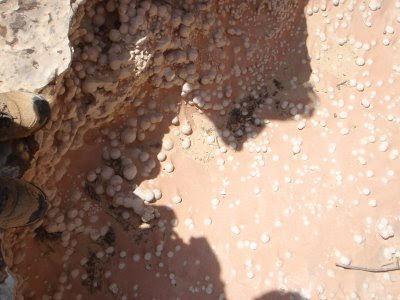 I was trying to take this picture while I was hanging half-way down a rappel, but I still had the camera in video mode from something, and while I was trying to change it with one hand without dropping the camera and keeping myself braked on the rope, the picture subjects below lost interest. 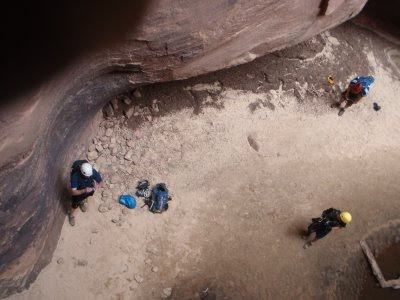 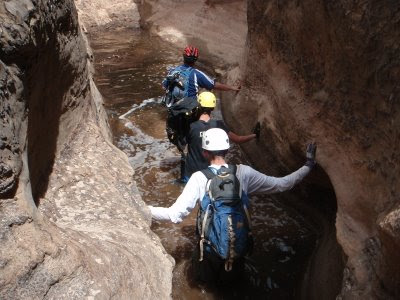 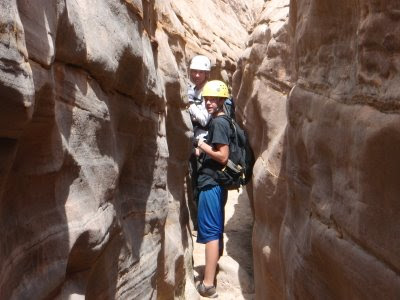 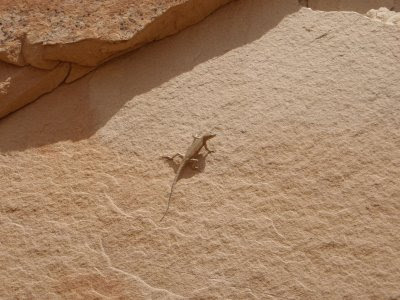 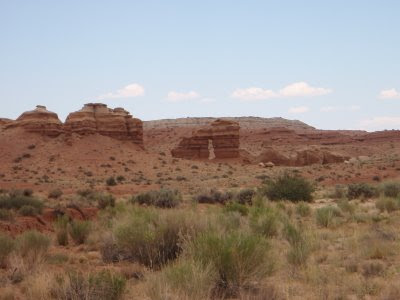 Sorry for the brief descriptions on most of the photos. It took so long to upload them that I've sorta lost interest, and Child is making dinner downstairs.