In canyoneering circles, there are two "big" canyons: Imlay and Heaps. Last weekend, we finally checked Heaps off our to-do list.

There were five of us on the trip. Left to right in the back: Randall, Josh, Corin, and me. In the front, Corin's brother, Jim. This was at the beginning of the West Rim trail (from the Lava Point side). We had a nice gentleman from Oklahoma take the picture for us. He was visiting with his son, and on one of our chats with him (we leapfrogged each other on the trail as we alternately rested and hiked) he mentioned that couldn't believe how amazing and beautiful Zion National Park was (quite a contrast from Oklahoma, I imagine). I realized that after so many visits, I was starting to take some of the beauty for granted, but it really is an amazing part of the country. 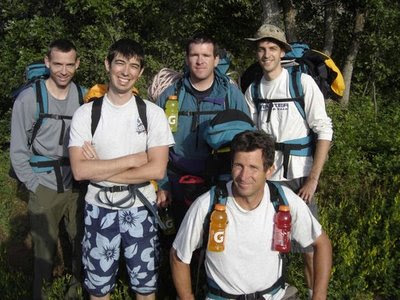 The night before, we camped at Lava Point. It was raining pretty much all day, but by the time night fell, the rain had pretty much tapered off. We decided to see what the weather looked like in the morning, since you don't really want to hike a slot canyon when it's raining because of flash flood danger. The morning was sunny and blue so we decided to go for it.

This is on the West Rim trail. I think the trail is about 12 miles long, and goes from Lava Point on one end to the Grotto in Zion NP. We could have started from either end, since our jumping-off point was somewhere in the middle, but we opted for the longer but less-strenuous choice. 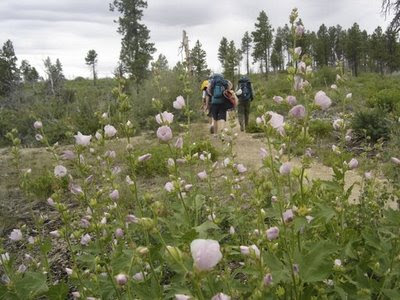 The sunny blue skies quickly vanished, leaving us with light gray skies and the occasional passing sprinkle. It was actually great hiking weather, nice and cool, far from the low-90 degree temperatures that had been predicted. About four hours later, we reached Campsite 4, which was where we left the West Rim Trail and dropped into Phantom Valley. This is the first rappel: 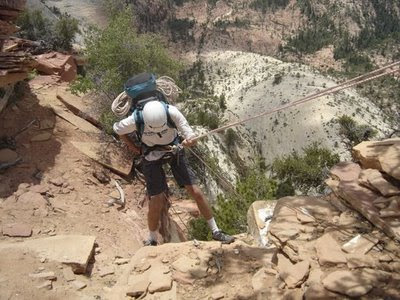 After that rappel, we had to traverse a knife-edge ridge with sheer drop-offs on both sides. It might be a little hard to tell from this picture, but the ridge is about ten feet wide. The directions we were going off overstated the scariness a little though, I think. It talked about people crawling on hands and knees, etc., but it wasn't really that bad, you just had to be careful where you put your feet for a few steps. 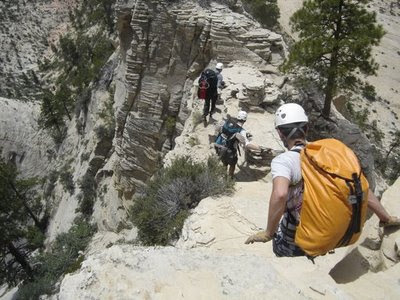 The worst part of the trip was the hike to the bottom of Phantom Valley. After the two rappels to get in, we were still quite a ways above the valley floor, and we had to hike down some steep, ankle-twisting slickrock in the sun (which had reappeared). We finally got to the bottom, however, and debated whether to camp where we were for the night, or continue on and do a two-and-a-half hour section of narrows before camping at a place called "The Crossroads." Since we still had a few hours of daylight left and The Crossroads sounded like better camping, we finally decided to continue on. 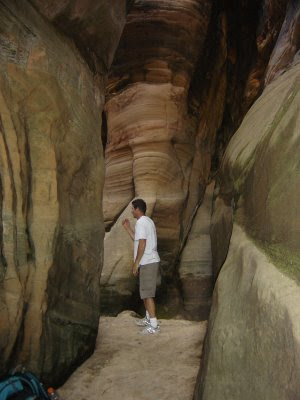 We suited up in our wetsuits and started in! Heaps was all about the water, and there was plenty. In some sections, we had to swim for a few hundred feet. As usual, the water was frigid in most places, but I was borrowing Randall's 7 mm wetsuit and it kept me pretty warm. 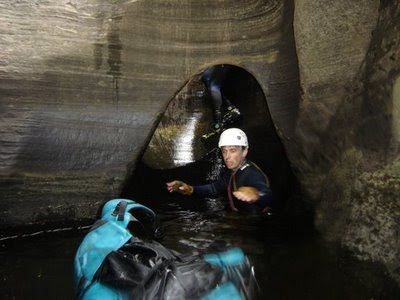 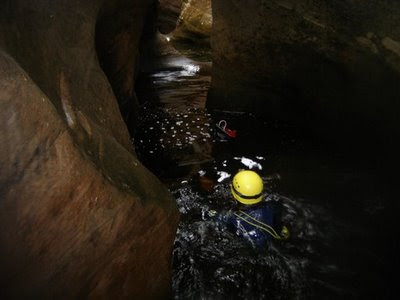 This picture is a little fuzzy, but it gives you a good idea of what a keeper pothole is like. Due to our wet spring, the potholes were mostly full, which was nice. Note how Corin is treading water and trying to pull himself out of the pothole at the same time. Now imagine the water level even a foot lower. In that case, he wouldn't be able to reach over the lip, and would be facing nothing but a wet, mossy, sheer rock wall. There's various techniques for dealing with keeper potholes, but a lot of them involve not getting in in the first place. Fortunately, we came prepared with the neccesary equipment and combined with the high water level, we never had a problem. 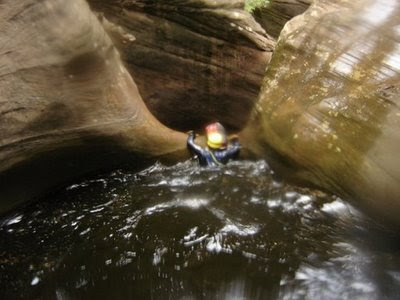 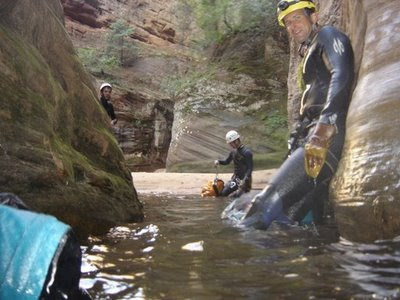 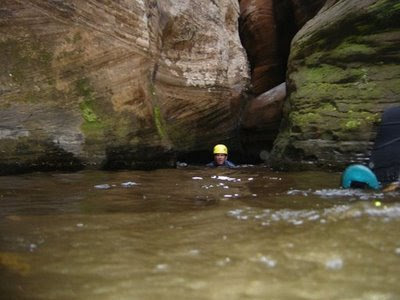 Keeper potholes can be deadly for a variety of wildlife, not including canyoneers. One of the occupational hazards of swimming through canyons is running into floaters, a small speciman of which is pictured below. I have yet to run into large things like deer, but I've heard horror stories. You try not to think about what's in the water when you slide into a pool and your head goes under, or when you accidentally swallow some water. 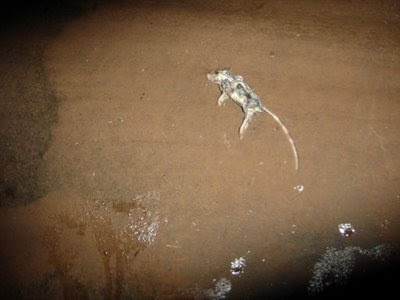 Water, dead animals, and potholes aren't the only obstacles you face. There's often log jams left behind by flash floods. If you're lucky, they're stuck partway up the canyon like this one, allowing you to crawl underneath. If you're not lucky, you have to climb over a shaky mountain of logs, sticks, and other junk. 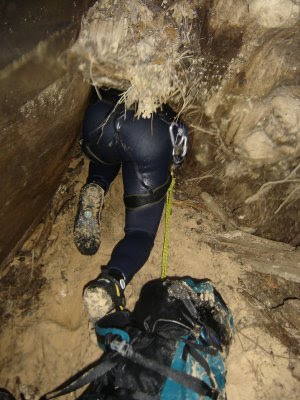 And of course, rappels are always fun. There were quite a few in Heaps, including the infamous final 300 foot rappel. 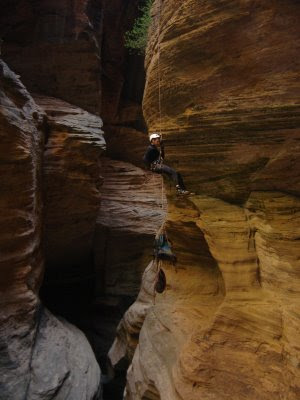 To get to the final rappel (actually, a sequence of three rappels, 500 feet in total), you actually have to climb up this little chimney. 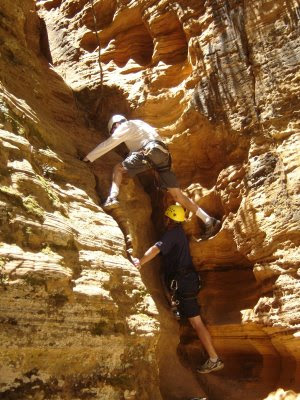 Unfortunately, I don't have any nice pictures of the final rappel. All these pictures actually came from Randall's camera, since mine turned out to have an almost-dead battery, and I had left my spare at home. The rappel ends in Upper Emerald Pools, so there were quite a few tourists with cameras filming us coming down, and Corin left his email address with one couple who promised to send us the pictures they took. We'll see if they come through with that.

Here's the best picture we have, looking up at the lip we rappelled over, 300 feet above the ground. 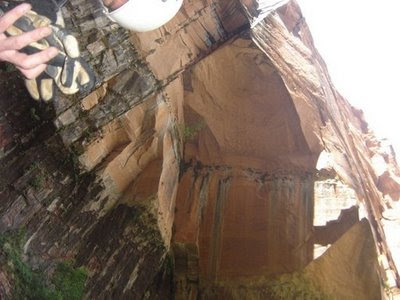 You are so handsome!! I'm so glad you had fun and made it home safe!

Wow! That looks amazing! I have never been canyoneering before--any chance I could talk you into taking me sometime? Maybe on one of the beginner trails?