A few weeks ago, Child and I read a story on KSL about "urban gardening," basically, growing a garden on a porch, balcony, or small backyard. We had already been planning on doing our own as soon as it stopped snowing, so we read the story with interest.

The story was more like a human interest story featuring a guy who started a garden on his apartment balcony. It was an interesting read until the second to last paragraph, where it said, "It cost Joel about $700 for the garden, including pots, plants and instruction on how to care for everything."

$700?! What was this guy growing, gold bars? Reading the story a second time, we caught something we hadn't the first time through: he had hired a guy to do a custom garden for him. Having grown up in a family which constantly had a garden, I would never pay someone to plant a garden for me, much less $700 for a few pots on a balcony, but to be fair, I'm assuming the apartment owner had no experience with gardening.

I still think he could have read a couple books (there are dozens about "square foot gardening"), and there's no way he's going to get enough food out of it to cover the cost, but perhaps he's more concerned about the organic-ness and environmentally-friendly side. Either way, I hope he sees how easy gardening really is and does it himself the next year. He's already got the pots and dirt.

Anyway, on to our own garden. We made our first real strides today, getting our dirt and plants. It's still a little early to plant, although if I remember correctly, our peas don't mind the cold, so maybe we'll plant them at least.

When it comes to containers, we're trying something unique, which could fail horribly, but has an outside chance of working and the benefit of being cheap (free). Dismayed at the price of containers ($5 for a cheap plastic storage tub that we could drill drainage holes in, up to $100 for decorative ceramic planting pots), Child and I looked into building some simple wooden boxes.

Wood is expensive as well, and I started thinking. Since we're only planning on living here one growing season, we don't need something permanent. What about cardboard boxes? They're free, and they decompose. Obviously an ordinary cardboard box wouldn't be strong enough or last long enough, but a banana box (the lid and bottom combined to give it double strength) might just hold out for a few months.

So we decided to give it a try. Worst case scenario, the cardboard starts falling apart and I end up buying the wood after all and building a wooden box around the cardboard boxes. 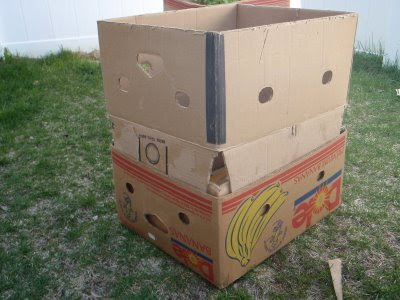 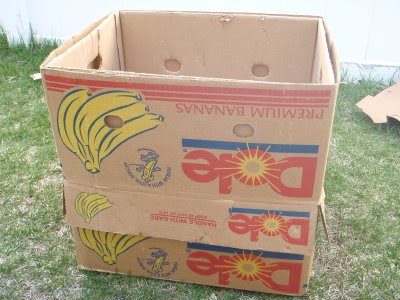 Total cost so far: $42.50
Quite a bit less than $700. Not only that, but the shovel and trowel are one-time expenses, as the dirt would be if we weren't moving/don't move. The plant food is non-essential as well, Child and I decided to buy it mostly as an experiment to see if we really saw that big of a difference between my parents' plants and ours.

Anyway, what it boils down to is that assuming we have no more expenses, we need each of our 7 varieties of plants to produce at least $6 worth of food to break even. I think we're pretty safe. That's a handful of tomatoes or peppers from Harmons.

My biggest worry for our garden, after the cardboard boxes falling apart, is sunlight. Since we have a tiny backyard (12' x 20'), with a two-story townhome on the south and a 5 foot tall privacy fence on the other three sides, not a whole lot of light gets into our back yard. We'll see what happens. 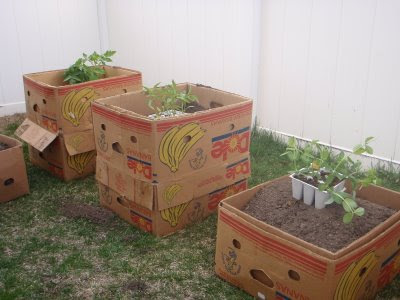 To date, getting the dirt was the hardest part. The pioneers would laugh at the fact that we had difficulty finding dirt, but that's modern times for you. Child found a couple people who were giving away "free dirt" on Craigslist, but at the one house we made it to, the dirt was a solid yellow clay/rock mess. Not gardening soil by any stretch.

We finally ended up taking our car to a topsoil company in Lindon (Mountain Topsoil). I felt a little out of place with our little Saturn in a line of pickup trucks and trailers, but we had the guy driving the Bobcat dump a half-cubic yard of dirt into a row of banana boxes. I stuck those into our back seat, then took a shovel to the remaining pile and loaded it into our tarp-lined trunk. We were riding pretty low and slow driving back to Draper, but we made it without any difficulties.

I have to add: this was all done on our way home from two hours of Ultimate Frisbee in Provo, so I was already tired. And from comparing a handful of links (e.g. this one), it's pretty fair that a cubic yard of topsoil weighs one ton. Since we got half a cubic yard, I had to lift and shovel a thousand pounds of dirt into Jasmine. Then, once we got home, I had to unload all of that and carry it to our backyard.

I'm tired. And Child gives amazing massages.
Posted by The Writer at 3:55 PM