The past half-week has been a lot of fun. Canyoneering, mountaineering, and hot-spring-eering.

We'll start with last weekend, and the canyoneering trip to Leprechaun Canyon. Leprechaun Canyon has three forks, and since we had three Taiwanese friends along who had never been canyoneering before, we decided to do the shorter, easier right fork. We went down Friday night and camped at Sandthrax campground; fortunately it was a lot dryer and less windy than the last time we had camped there. The next morning we started towards the canyon, stopping to talk to another guy who had camped nearby. 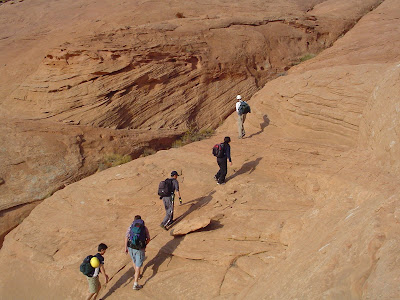 The canyon comes out near the Sandthrax campgrounds, so you start by climbing up some sandstone hills to a plateau, then hiking across the plateau to get to the start of the canyon. We followed the same path that we had used to get to the middle fork previously, but since we were on the right side of the canyon and we were doing the right fork, we didn't have as far to hike. Not that it would have been too bad, since the weather was about perfect: cool, but sunny. 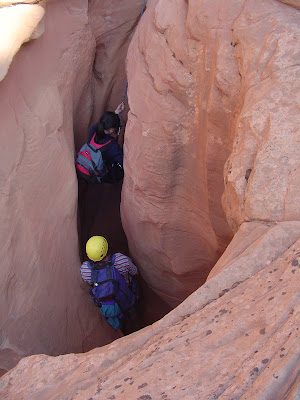 We soon dropped into the canyon. We were going a little slower than usual, since we had to show the Taiwanese students how to use a harness, how to rapell, etc. They really enjoyed it, though. 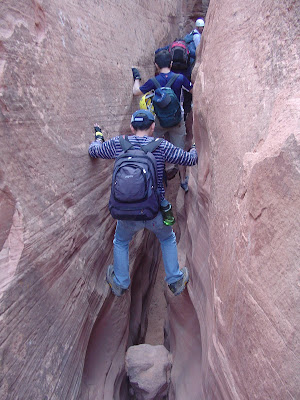 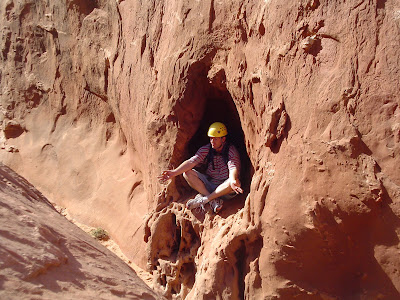 When I snapped this picture, Corin was at the front of the group while I was at the back. In between, our third friend was helping the three Taiwanese students negotiate a down-climb. I told Corin to climb in the alcove for the picture, which he did. He stayed up there while Randall and the other three passed beneath him. He was above their eye-level so they didn't see him, but they knew he had been ahead of them. Thinking he was still ahead, they started hurrying, trying to catch up to him. Finally one of them yelled his name. Now in last place behind me, Corin yelled back, "What?"

They were rather startled. It's a slot canyon, so there was no obvious way to get from the front of the group to the back. We told them it was "canyon-magic." 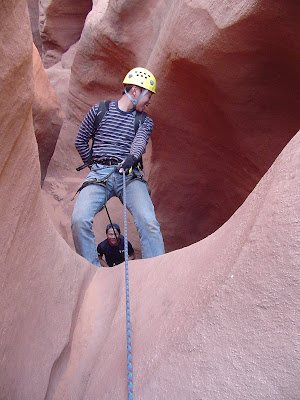 When Child saw the above picture, she told me it was a little weird. Looking at it, I can see how it might appear odd. 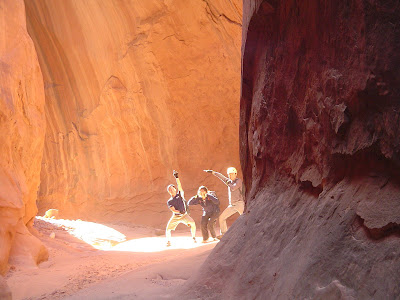 When they saw this shaft of sunlight, all three Taiwanese students instantly posed in it. It was a lot of fun having them along--even if they would instantly throw up a "V" sign every time they saw me aiming my camera at them. "No! I want a *candid* shot!"
Posted by The Writer at 12:23 PM