Last night Child and I received some last-minute invitations to an dinner event that featured the First Lady of Guatemala, Wendy de Berger, as a speaker and Michael Ballam playing the piano and singing as the entertainment. It was an event held by Enterprise Mentors International, which gives microloans to people in developing countries.

One of the other people at our table told a story about a trip he had gone on to Guatemala to help build an orphanage. The government had given them the land for the orphanage, a vacant lot that was strewn with broken and rusted-out cars. When they started clearing out the cars in preparation for building the orphanage, they found out that they ended up displacing thirty children who had been living in the cars! Those thirty kids were the first ones into the new orphanage when it was built, however, so I guess it turned out okay. Really makes you think, though.

Our poor waitress was having a difficult time. She was very pleasant when we first arrived, complimenting Child's grandma on her dress, but later that evening Child noticed that she looked like she had been crying. Child asked her what was wrong--apparently she had hit someone in the head with a pitcher of water. The people attending this weren't your average Joes (except Child and I), they were people like Michael Ballam, the Guatemalan First Lady's entourage, general authorities from the Church of Jesus Christ, the guy who does Music and the Spoken Word for the Mormon Tabernacle Choir, and high-powered businessmen from around the country who help with the third-world mentoring. I could picture the MC getting up, "Um, we regret to announce that Michael Ballam is no longer performing...he got hit in the head with a water pitcher..." The more lady was probably scared to death that she'd get fired or something.

At the end of the evening, one person at each table won the centerpiece, a beautiful vase of flowers. Good thing I've always dreamed of winning a vase of flowers, because I ended up getting ours! Anyway, I gave it to Child. 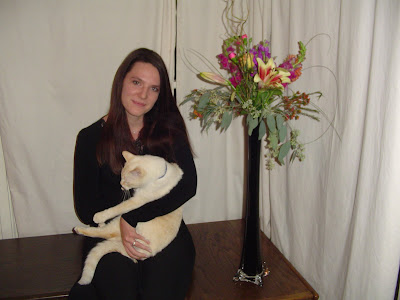