So I promised Padre Jaime's house. 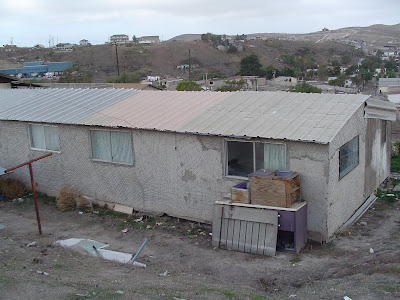 It was about the size of a mobile home, but without all the luxuriousness and ameneties, such as a bathroom door, and heat. There were eight of us, and seven beds. You do the math, then take a wild guess who slept on the park bench in the hall. I had an overwhelming urge to use newspapers as blankets, but since Tijuana was nowhere NEAR as warm as Mexico should have been, I abandoned the humorously appropriate covering for a more practical cloth one.

Since there was no shower and Child mentioned in passing that I smelled like a "sweating pig eating garlic and sunbathing on a hot day in a garbage dump," (not her exact words, but the essence of her statement) I had my hair washed over the sink with a pan of lukewarm water heated on the propane-powered stove. The only trick was keeping an eye on the bucket under the sink and emptying it before the leaky pipes caused it to overflow.

Our whole trip wasn't ALL such decadent high-living and comfort, but once we moved into an abandoned hospital, I at least got to upgrade my sleeping arrangements from the park bench to a box-spring mattress. Not only that, but most of the bathrooms had doors. The one bathroom that didn't led to the unfortunate but amusing incident of mom getting locked into one of the bedrooms.

Since the bathroom had no door, the plan was to simply lock the door of the room containing the bathroom. As soon became apparent, the handle mechanism on the bedroom door was faulty, and the door refused to open to let her out.

This was no sheetboard and aluminum foil door, it was a stern, heavy-duty wood door that knew its business and was evidently built to withstand determined Mexican banditos with a desperate need to use "el bano." Even the doorknob proved intransigent, and we had at least a half-dozen highly trained people working over it. 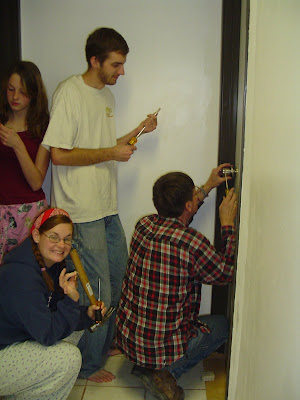 It wouldn't have been so bad but it was after we had gotten "home" from a long day of heavy work, and everyone was tired. The bedroom of her imprisonment was the one I had stolen my box-spring bed from so we couldn't just leave mom alone to spend the night there, even if she had let us. Fortunately, if circumstances turned out that she had to spend an extended period of time in the room, she had a baththroom, like, right there.

Complicating things, we were on the second story of the hospital, with a low neighboring shed blocking access to anything beneath the window in her room. Putting our heads together (a tired and hungry mom can produce remarkable levels of inspiration), we came up with the idea of tying a hammer to the end of an extension cord, then swinging it from a neighboring room's window to mom's window. The hammer, combined with a screw bit slipped under the door, allowed her to pound out the pins of the door's hinges. A final shoulder check from dad sent the door flying in (and causing the previously-removed and discarded doorknob to become amusingly embedded in the door when it landed on the floor).

Tune in next time for...roads and dogs.
Posted by The Writer at 2:44 PM