After Christmas and a week in Tijuana, Mexico, I'm going to try getting slowly caught up in my blog.

Our donkey had her feet trimmed, which was interesting to watch. Her hooves were so overgrown that she was starting to walk way back on her heels, which had to be uncomfortable. It'll still take her a while to start walking normally again, but she will eventually. We get animals into the shelter in about every condition, but these were the worst feet I've seen.

On a funnier note, we were having a BBQ lunch to celebrate one of the inmates being released, and we were talking about pets we had and have. The inmate in question was already in a good mood because of his imminent release, and the general mood at the table was jovial, so the stage was set for one of the ladies reminiscing to be mis-interpreted. She started talking.

"I had a little chihuahua once. I lived in an apartment with no yard or fence, so I usually kept it inside." She took a bite of potato salad. "I decided to take it out for a walk one day, but when I walked outside, the wind was so strong..."

She couldn't finish. The whole table burst into laughter at the immediate mental image we each got of a chihuahua bouncing down the road in a strong breeze, with the inmate practically falling off his chair he was laughing so hard.

Course, it turned out that she had been about to say that the wind was so strong her chihuahua got scared and ran off and got hit by a car, but it was too late, our own mental completion of her story was just too funny and we chose to go with that. For the rest of the day, whenever this lady was doing something or looking for something, the inmate would suggest, "Maybe the wind blew it away," then crack up laughing again.

The shelter director also called me into his office right before I left. Turns out he wants me to attend some conference down in the southern part of the state, somewhere around January 17 or 18. Something to do with animal control and shelter management. Sounds intrigiuing.

Mexico
So my plan is/was to slowly put up reminisces of Mexico as I have time, but we'll see how good my memory is. First off, we (me, Child, my family, and a few other random people) went down to Mexico as a part of "Charities Anywhere" to work on various service projects: digging trenches, pouring cement, and lots of dry-walling.

The one incident that comes to mind first was attending New Year's Mass in a small Catholic church. A lot of our service had been directed by the local Catholic Padre, since he knew who needed help, so we thought it would be nice if we attended one of his services on Sunday. It was a tiny, quaint church, decked out with Christmas lights and various statues and pictures, with the large double doors open to the cool night air the entire service.

The opening song was Jingle Bells (in Spanish of course), which I thought was rather funny. It's not what I usually consider a church hymn, but they had a guitar player leading the way and belting it out. During the service, a cat wandered through, enjoying the warmth, and a dog took up a position under one of the pews. It really was a lot of fun. I wish OUR church had dogs walking through it... 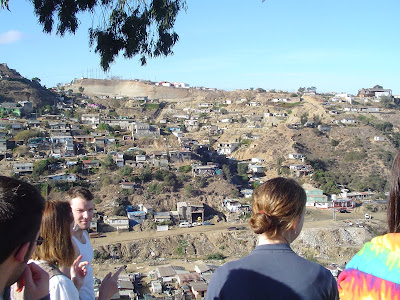 The Gully was one of the poorest area I've ever seen. The houses were built out of scraps of plywood, pallets, and pieces of billboard, with old tires doing everything from serving as stairs to shoring up the almost vertical hillside. 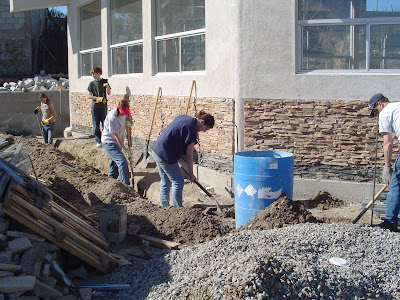 When we weren't working in the gully, we were working on one of Padre Jaime's projects, in this case, digging a trench (de muerte) for power lines. It was back-breaking work with picks and shovels. It was hard, especially when we started getting close to the required three-foot depth. Hard to lift the dirt out, hard to get leverage to dig any dirt up. And I don't think the soil had seen any rain in years.