I made the mistake of sneezing during a haircut.  On the plus side, I got to buy a new hat! 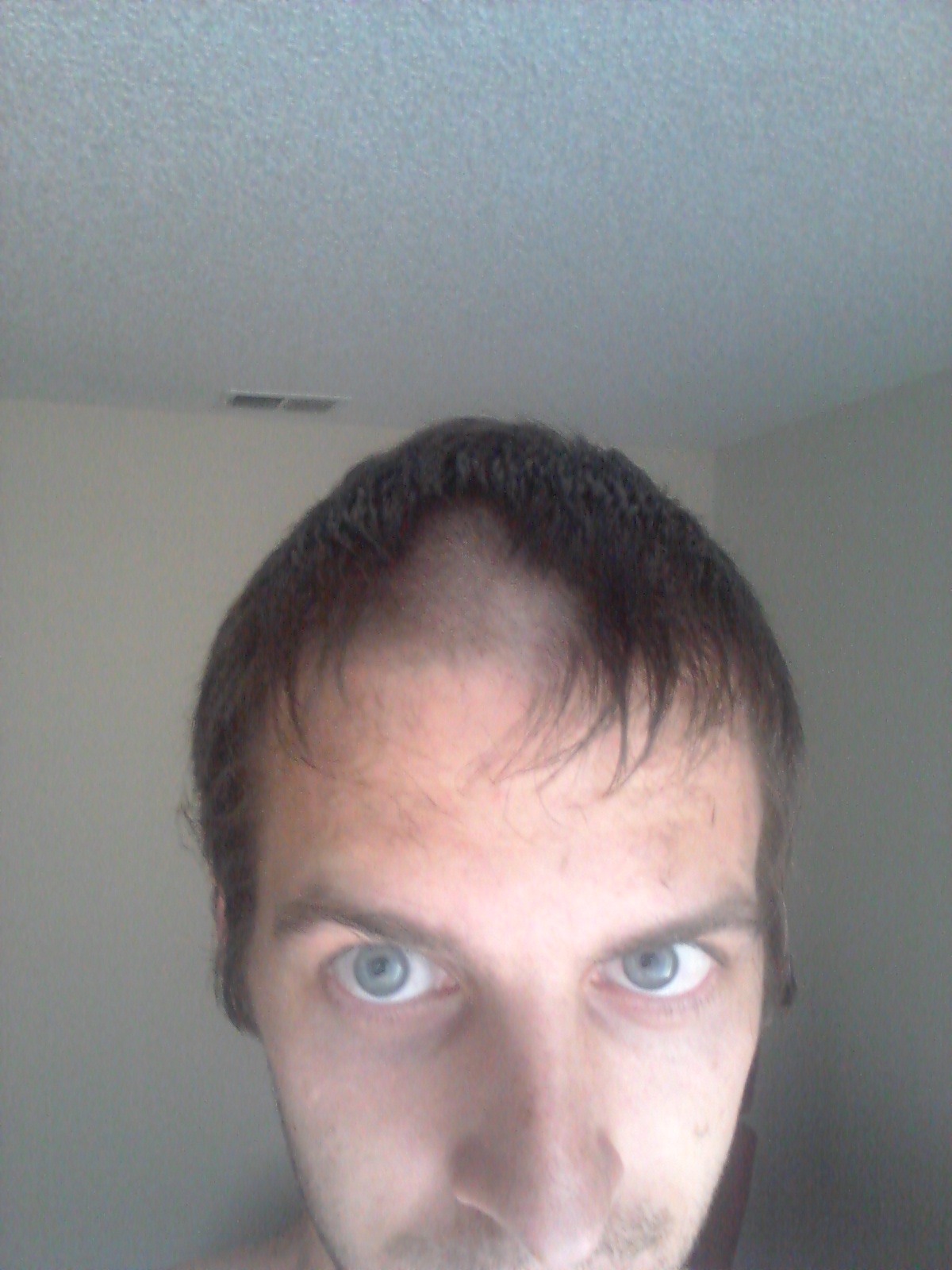 In answer to Charity Z's question, no, I really did just buy a hat. 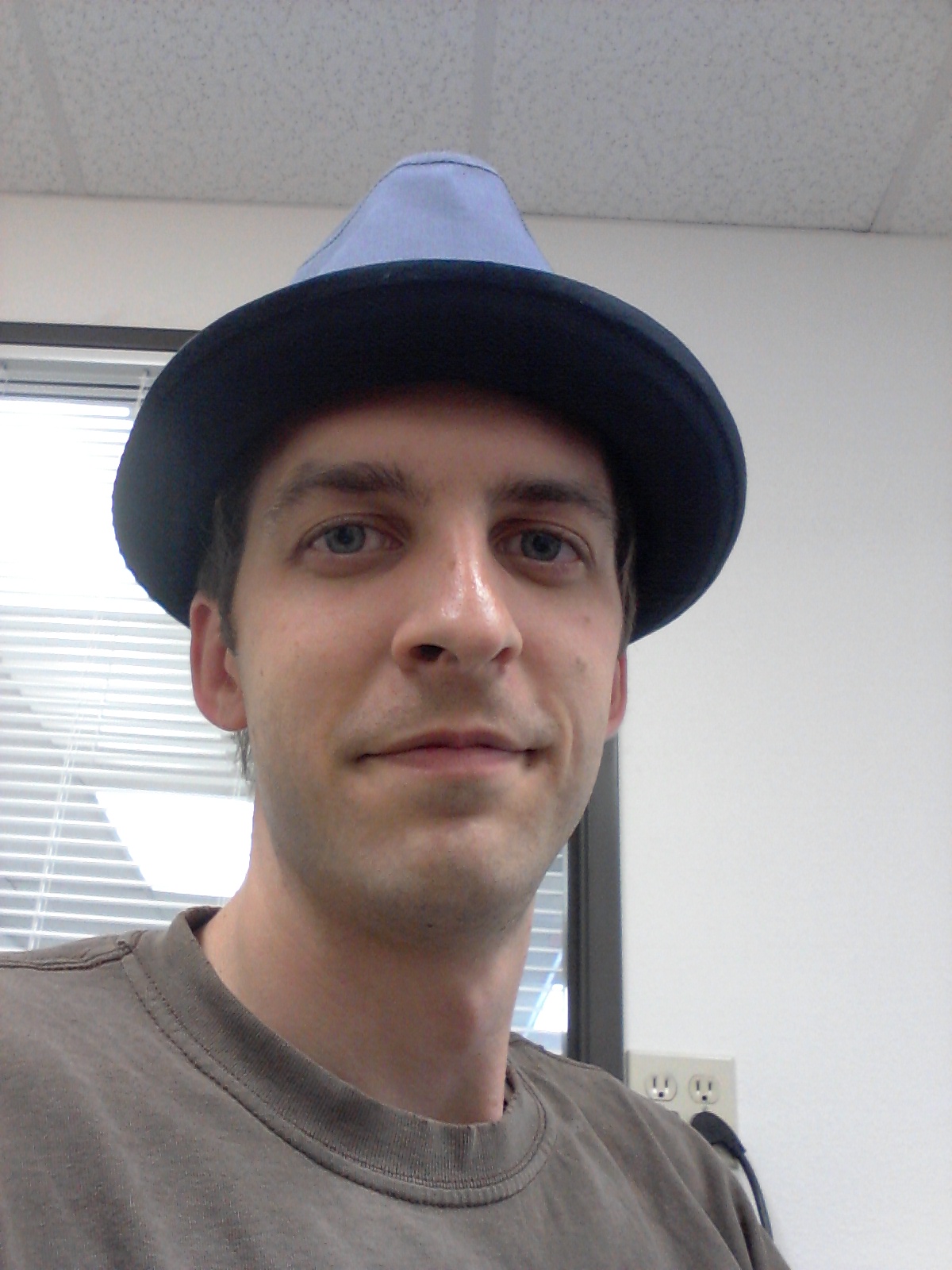 The size of triangle flavor

Ash and I were playing, and Ash wanted me to cut her a triangle of "food".  I handed the virtual food to her, and she said, "It doesn't taste like triangle."

She held her hands a couple feet apart.  "This big," she said.

Ideas are cheap.  Every inventor has a notebook full of them.  The ideas are hoarded and hidden like little nuggets for fear that someone will steal them.  But coming up with ideas is the easy part.  Executing on them is the hard part.  The same people who have the motivation to do something with an idea already have a notebook of their own.
Posted by The Writer at 10:54 PM No comments:

While the row of raspberry plants ran along the patio edge, the opposite side faces a fence, with a gap of perhaps two feet between them.  That meant that if I planned to pick raspberries from the fence-facing side, I would need to squeeze between the mass of raspberry bushes and the fence, carrying twine with me to hem the mass of shoots in.

Ash was being a "big helper" to Daddy.  As Daddy was entangled deep in raspberry bushes, she had twice been directed inside and given explicit directions on where to find scissors, down to the specific placemat on the kitchen table where they could be found.  The scissors had somehow developed a cloak of invisibility, however, which resulted in Daddy finding himself in possession of children scissors, which he wielded in his gloved hands with less than his usual natural dexterity.

Regardless, with that chore accomplished, Ash was in need of a second task.  Daddy, in a moment of insanity, presented Ash with a hose.  "Water the raspberry bushes while I'm trapped between the thorn-covered stalks and the fence," he directed.  "I've turned the hose on full power to allow for the most amount of water to be emitted as possible.  I know you have a history of watering everything within a 30 foot radius, green or not, but I'm sure you'll demonstrate pinpoint accuracy this time."

With that, I tied the twine to the first stake, pushed aside the first mass of raspberry stalks, and took a step into the narrow gap.

The twine was instantly wrapped around thirty raspberry stalks, myself, and a startled rabbit.  What little space hadn't been taken by raspberry plants was filled with similarly thorn-covered weeds who had taken advantage of their hiding place to grow to ominous sizes.  Perhaps seeing the tangle of twine as competition, spiders converged from all directions to fight off the over-sized intruder.

I desperately wielded the tiny scissors in an attempt to free myself, but they promptly dropped from my clumsy gloved hands and disappeared into the depths of the raspberry bushes.  "Ahh!" I said, calmly assessing the situation.  To retrieve the scissors would require shoving my face and hands deep into a dark, dense mass of thorny raspberry stalks guarded by spiders.  "Ahh!"

My mild exclamations drew Ash's attention.  "What's that, Daddy?" she shouted, charging towards me.  "Why are you shouting?  What are those words you're saying?"  The hose in her hand swung wildly, spraying raspberry plants, Daddy, the fence, the house, and the compost pile with equal abandon.

"Look out!" Daddy shouted.  "You're getting Daddy wet!"

The thunder of hundreds of spider feet taking cover from the deluge by crawling up Daddy's pant legs must have drowned out Daddy's statement.  "What?  What?" Ash answered.  She scrambled closer in an attempt to see what was happening.  Water hosed Daddy down from face to shoes.  Spiders scrambled higher to escape the rising tide.

"Ahh!  Daddy!  Water!  Stop!" I clearly articulated.  My careful explanation of the problem and proposed solution was lost to her three-year-old intellect, but she clearly understood at least two of the words.

In a burst of herculean strength, I tore free from thorns, twine, and spiderwebs.  A moment later I gained the patio, panting heavily.  A rabbit bounded into the weeds.  Spiders retreated to their lairs.  Ash looked me over. 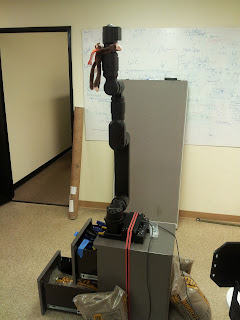 Getting ready to do some robotic arm control.
Posted by The Writer at 12:39 PM 3 comments:

I just had one of the best smoothies I've ever had, and that includes anything I've gotten from Jamba Juice or other similar smoothie chains.


Blend together. No additional water or other liquid necessary.  Drink.

Best. Smoothie.  Ever.
Posted by The Writer at 8:22 PM No comments:

I should have taken more pictures while building it, but I finally finished the owl house that I started on the day Alex was born.  We hung it in a palm tree out back, and now all that's left to do is wait.

The hope is that an owl will move in and wreak havoc among the local ground squirrel and mice/rat population.  If it decides to snack on our neighbor's rooster that starts crowing at 2:30 am, so much the better.

One of my younger sisters got married a week ago in the San Diego Temple, an amazingly beautiful building.  We had a reception on the beach afterwards, then transitioned to a pool and hot tub at the hotel where several of the out-of-town visitors were staying.  Following are a handful of pictures from the events.


Amusingly, the old guy at the furthest right of the hot tub wasn't part of our party, but he seemed to enjoy the activity and never left.
Posted by The Writer at 10:13 AM No comments: