Wednesday was setup day. The rodeo was held right on the military base, with the building-sized tent set up on an old firing range, to judge from the number of empty shell-casings that littered the ground. I contemplated throwing a few of them into John's backpack, just to make things a little more exciting when he tried to go through airport security on the way home, then thought better of it. If he were wrestled to the ground and tazed, it might hold up the whole security line and I'd miss my flight as well.

The tent had probably 50 booths, otherwise known as "folding tables." Since our company had turned borrowing other companies' equipment into an artform (our robots, laptops, radios, pretty much everything but the code we brought had been bummed off someone), we saw no reason to stop at the rodeo and talked AMREL, a laptop company, into letting us share their booth. We were even generous enough to give them one of the two tables on the second day.

Over the course of the rodeo, we borrowed additional robot parts from Segway, tools from AMREL, and additional antennas and radios from Antenna Products. We took AMREL's demo slot (you can't really demo a laptop, right?) and crashed the last 10 minutes of one of Segway's demo slots. In the afternoon, Davin talked AMREL into buying us lunch.

I felt a little bad about all our mooching, especially since it was more of a cycle than straight-up borrowing. We'd take one of Antenna Product's radios, break it, give it back, and borrow the next one at the same time. They could barely fix their equipment fast enough to keep up with us. Davin had to promise them ever-increasing future profits from our partnership just to keep them from beating us with wrenches. 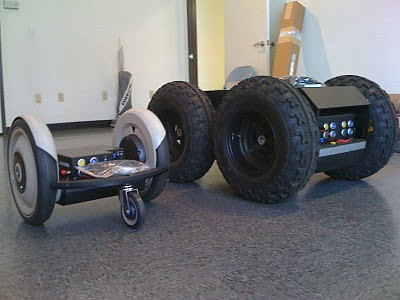 The two robots we took to the rodeo, sans all their radios, laptops, and other hardware accoutrements
Left to right: Segway RMP 50, Segway RMP 400
By the end of the day, however, everything was looking rosy. With the help of Antenna Products, who made the radios, we got the RMP 400 to venture further from Home Base than he ever had before. The laptops were in fine form and the computer programs had brought their A-game. Our first demo was at 10:30 the next morning and our confidence was high.

There was one thing we forgot to take into account, however: Murphy's Law. We would discover three things the next morning.

1) Having an early demo slot is a bad idea. If something goes wrong, you have no time to fix it before showing--or not showing--your demo to top military and civilian leaders whom you've specifically invited.

2) It's a lot easier to make your radios work when there's not 49 other companies trying to make their radios work at the same time. Especially if one of them is nefarious.

3) Working radios are kinda essential for a good demo. When your robot is tethered to your control computer with a three-foot cable, it's hard to explain the advantages of your system to, say, a bomb-disposal technician.

If you've got an iron stomach and don't mind a little carnage--at least someone else's--tune in tomorrow for the next compelling segment in our ongoing saga: Robots Gone Wild: How Boeing Almost Lost Their Entire Robotics Team to a Crazy Robot From 5D Robotics, Inc. Fortunately, the Driver Managed To Evade the Military Police, Since I Really Didn't Want to Spend the Next 10 to 15 Years With Three Off For Good Behavior at Fort Benning, Charming As It Is.

Also, we need to talk with our saga-naming people.
Posted by The Writer at 8:08 AM