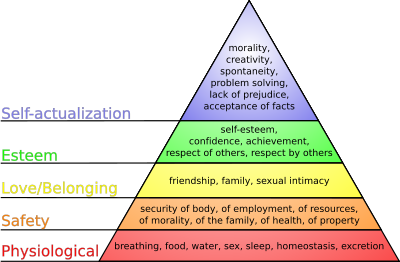 I had an interesting epiphany today at church. The question someone raised, and which I've heard raised before, is "Why do Latter-day Saints spend money on building temples, when that money could be used to, say, feed poor people?"

I've never really had a good answer for that, until today. In 1943, Abraham Maslow outlined a hierarchy of needs, where in general, the most basic needs need to be fulfilled to move to higher levels of needs. For example, you're not going to worry about your job (a second-tier need) while you're not getting air because you're drowning (a first-tier need).

The idea is that every level of need must be fulfilled for a person to be a well-rounded person. The top needs are actually called "growth" needs, which meshes nicely with the LDS belief that the whole point of our earthly existence is to learn and grow. Just because a level of need isn't as basic as another, doesn't mean it's any less of a "need."

The epiphany was this: there are people at every level in the pyramid, so the church must address every level. Giving all their money to the poor focuses on a single level of need, and ignores other needs that are just as real and whose fulfillment is just as vital from an eternal perspective.

I think the reason the question is raised is because it's difficult for people with more basic needs to see the importance of fulfilling higher-level needs. It's natural for the person sick with palsy to think his physical needs take precedence over someone else's spiritual needs, and the bigger the gap between the needs, the harder it is to see the importance. However, Jesus knew that all levels of needs were important, and didn't spend 24/7 healing people and raising the dead, he also took time to teach.

Also, I would guess that the higher up the pyramid you are, the easier it is to pull other people up from the bottom tiers. It's a matter of leverage. If you gave every penny non-essential for your own survival to someone less fortunate, you'd never get an education, never have a family, never get a decent job. However, if you took a long-term view and saved some of that money, you could get all of the above, and end up helping far more people in far more ways than if you had taken a short-term view. Could the Church help four million people in 85 countries in one year if it took a short-term view on things? I doubt it.