On our honeymoon in Mexico, we stayed at a resort named "Canto del Sol." They had a great buffet that we hit up three or four times a day, a beach, swimming pool, and tennis courts. It was apparently in the "old" section of town, meaning that it was a little more authentic, and a little more difficult to find someone who spoke or understood English very well. Most of our taxi drivers spoke only Spanish, but all you needed there was the name of your destination. 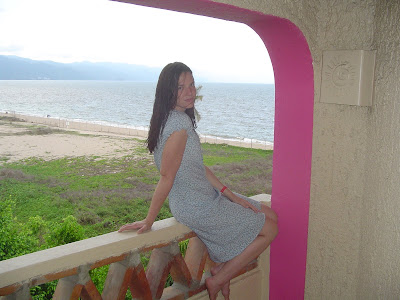 We had a lot of adventures on our honeymoon: horseback riding, swimming with dolphins, ocean kayaking, sand castles on the beach...Mexican taxi rides. Child was an expert cowgirl. Our guide for the horseback ride spoke only Spanish so there wasn't a whole lot of talking going on, but most of the ride was just through rivers and jungle anyway, so there wasn't a whole lot of commentary he could have given. "On your left, you'll notice another tree."

It contrasted sharply with the horseback riding Child and I did for our one year dating anniversary: there were no safety forms to sign here, no instructions, and since he couldn't really ask us whether we wanted to do it, our guide's technique to seeing if we wanted to gallop was to start doing it, of course causing our horses to follow suit, then look over his shoulder to see if we were enjoying it. (For the record, we did.) All in all, it was a ton of fun, and I got to practice my Clint Eastwood squint. Next time, I'm going to work on the "spitting-between-the-teeth." 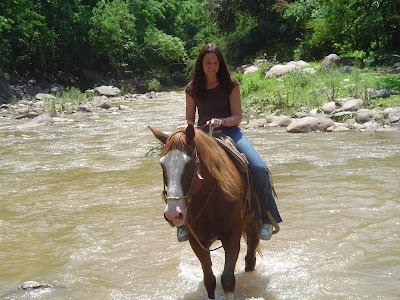 The kayaking was also fun, and I got to brave the jellyfish we saw in the water to get the picture below. 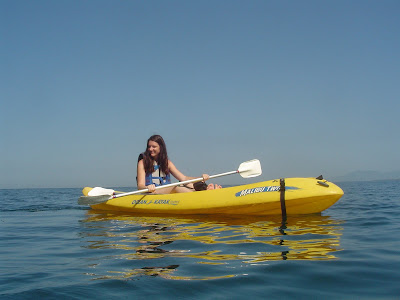 We also got offered weed on the beach by some old guy with missing teeth but respectfully declined, despite his insistence that it would be good for us.

Oh, and the swimming with dolphins was a lot of fun too. We got to dance with them, get kissed by them, and ride them by holding on to their fins as they swam (all under careful supervision of their trainers, of course). Unfortunately we weren't allowed to bring our cameras, and because of my refusal to give in to what I consider scams (read: paying $17 for a single picture), we don't have a picture of it. :)
Posted by The Writer at 12:04 PM

I like how all the pictures you posted were of me. :)

Well, you were the best, and best-looking thing about the trip. :)