Last Wednesday, Child and I went to Texas, to escort her grandmother down to Corpus Christi to see an old friend who was in the hosiptal. After we dropped her off there, Child and I drove up to New Braunfels, northeast of San Antonio, to visit her other set of grandparents.

They had recently bought a house on the Guadalupe river, and we stayed there for several days. One of the highlights was going inner-tubing on the Comal river. At one of the parks in New Braunfels, they had a "tube-chute," which was a narrow, curving channel that the water was forced through, making and exciting ride for inner-tubers. You could float all the way down the river, and get out at several stops before you left the city. 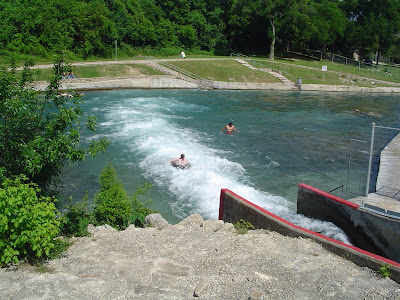 It also seemed a popular destination for beer-drinking inner-tubers, which just seems a bad idea to me. Granted, the river wasn't exactly white-water, but mixing drunkeness and water just doesn't seem smart. A couple police evidently thought the same, and were posted at the bottom of the chute checking for underage drinkers. 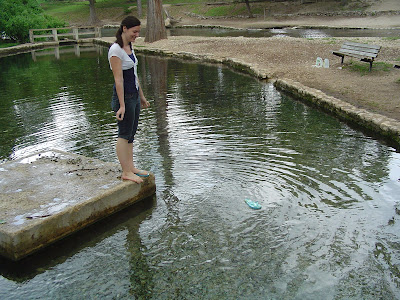 On Sunday, we left New Braunfels and went through San Antonio to Castroville, where my grandparents on my dad's side live. We visited with them for a couple hours, as well as some other relatives who live right by them. That was a fun visit, since I haven't seen them for about five years.

After that, we drove back to Corpus. On Monday, Child and I visited the beach on Padre Island, where the water wasn't nearly as cold as I thought it would be. I'm not a huge fan of the ocean--it's cold, salty, and wet--but the visit was actually enjoyable, to my surprise. It helped that Child was there. :) 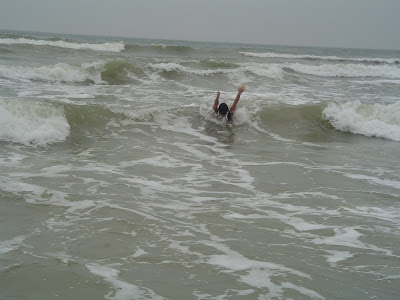 We flew home this (Tuesday) morning.