A few things to report, starting with last night.

Sleep Deprivation
Somewhere in the early morning hours, I was woken by siumultaneous shouting, swearing, blaring music, and flashing lights from the other bedroom in my apartment. Having spent an all-nighter the previous night, I only woke up enough to hear mixed in the crazed shouts something about "keep me awake, will you?!" then I fell back asleep.

In the morning, I asked the guy who had been doing the shouting what had happened. He explained that over the past couple months, his roommate had kept him awake with constant snoring, middle-of-the-night phone calls, and things like that. I guess he had woken up three times last night from the snoring, and had finally gone crazy. He had grabbed a butcher knife from the kitchen and charged into his room, turning on the music, flashing the lights, and swearing up a storm.

Probably scared his poor roommate to death, and I guess his roommate didn't snore that night--because he didn't dare go back to sleep.

Still, there's probably better approaches to take. Heck, I've slept on a sofa for an entire semester in a different apartment for the same reason (snoring roommate).

Sleep Deprivation II
To celebrate NaNoWriMo (National Novel Writing Month), my writing group decided to pull an all-nighter writing activity. We met at Child's house and fueled by sugar-highs, started writing. It took me all night to do a single chapter, but it was the first chapter in my novel and one I had put off writing forever, so it was great to finally get it out. Granted, it'll need a lot of polishing, but at least it seemed brilliant at 4 AM in the morning.

Canyoneering
Last weekend I want canyoneering down in the Robber's Roost area of southern Utah. The canyon was called Little Blue John, made famous by a hiker back in 2003 who got his arm caught under a boulder while hiking alone, and had to cut if off to free himself.

I'm not sure if it's possible for canyons to be Jonahs, but we almost had another accident happen on our trip. We started hiking Saturday morning, reaching the first drop about 10 AM. It was a 25 foot cliff, but because it was a narrow slot and had a slight slope to it, it was probably down-climbable. However, we had a brand-new canyoneer with us, along with an older guy who didn't like down-climbing, so we decided to rig it for a rapel.

We made an anchor out of a pile of stones, wrapping webbing around to attach our ropes to. (Webbing is the material used in seat belts and vehicle tow ropes.) The rocks were sharp sandstone boulders, and somewhere underneath our anchor, the webbing had been mostly cut through. I was the first one on rapel, starting down a sloping ledge that led to the main drop. Right when I reached the drop, the webbing broke.

I started falling, and instictively stretched out my arms. Miraculously, I caught the sides of the crack and stopped myself about 10 feet down the drop. I got a few scrapes on one of my arms, but if it had been any other rapel (like the two 70-foot drops we did later that day), it could have easily been deadly.

Something like that accident is fortunately VERY rare in canyoneering. The group of guys I go with are very safe, and we take all precautions to stay out of trouble. Still, accidents do happen.

Most of us in the group are religious, and the rest don't object to a prayer before we start a canyon, so we've made it habit. The ironic part is that I always joke that we should stop praying, because then nothing bad ever happens and we have no stories to tell when we get home. Now I firmly believe that the Lord has a sense of humor and some might think this incident proves that, but I think he was also making a point. I guess that's one joke I'll stop making. 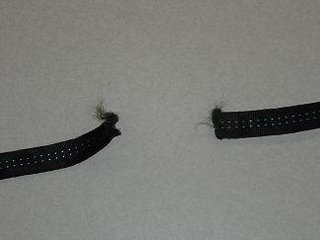 Thank goodness you're ok. That could have been really, really scary.

I had a snoring roommate. Earplugs help.